“It’s very exciting to be a writer today because there are so many different ways to experience a book now. Audiobooks are at the vanguard. Audio pioneered whole new ways for us to come at books.” 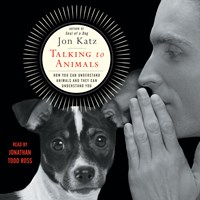 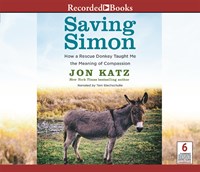 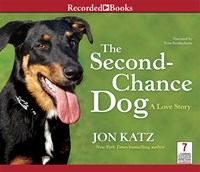 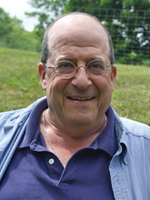 Jon Katz loves to listen to audiobooks--just not his own.

“It’s hard for me to hear my own stuff. It freaks me out. I listened to Tom [Stechschulte, the narrator of SOUL OF A DOG and Katz’s other books on audio] once and realized that narrating a book is a special skill--a gift. It brings a whole new dimension to the book.” Katz spoke from the office/study of his 1861 vintage home at Bedlam Farm.

The author lives and writes at the 70-acre farm near the New York/Vermont border. His 20 published books include many humorous memoirs that have made fans feel as if they’ve visited him there and hung out with his two donkeys, two barn cats, and the borrowed sheep herd that comes each summer for the pleasure and practice of Katz’s border collies, Rose and Izzy. He also has a Rottweiler-shepherd mix named Frieda and a black Lab named Lenore. The latter came to Bedlam with Katz’s wife and now shares his bed.

He pauses to go to the door to let Lenore, Rose, and Frieda inside, laughing at a question about farming. “I make no money farming,” he says. “I make my living with writing and photography.” People can follow Katz’s daily adventures on his blog, www.bedlamfarm.com, or plug his name into a YouTube search to watch his video shorts.

Katz rises at 4 or 5 A.M. every day to write through the morning. Right now, he’s working on a book about Frieda, a rescued dog. “The dogs wander in and out of the study, but this isn’t social time. Creativity is not social or dramatic.

It’s a job; it’s work. I’m usually about two books ahead of myself.” Katz has two new books coming out this year, GOING HOME: FINDING PEACE WHEN ANIMALS DIE and MEET THE DOGS OF BEDLAM FARM, his first children’s book.

The dogs don’t lie on his feet or sit in his lap while he’s writing. “It’s not a time to play or cuddle. Besides, I don’t write as a dog lover. Dogs have been so emotionalized and anthropomorphized in recent books. What I’m interested in is the connection between dogs and people. I’m really writing about people.”

After a pause to sign for a package from UPS, Katz explains our relationship with our best friends in 21st-century America. “We’re stressed, unhappy, worried, and we’re turning to animals more and more for support. In 1963, there were 15 million dogs owned in this country. Today, there are 72 million. And the leading cause of death for American dogs is overfeeding.”

Katz and his dogs combat that hazard with sensible meals and a walk of two to three miles a day on country roads and farm paths. He’s usually listening to an audiobook on his iPod as they go, currently Gabriel Garcia Marquez’s LOVE IN THE TIME OF CHOLERA. He also listens while driving, sometimes heading to an Upstate New York National Public Radio studio to record a new edition of NPR’s “Dog Talk.”

“It’s very exciting to be a writer today because there are so many different ways to experience a book now. I don’t think we’re losing readers, even though everyone wants to freak out about traditional publishing. I think there are lots of new people being pulled in to read in lots of different ways. Audiobooks are at the vanguard. Audio pioneered whole new ways for us to come at books.”--Marty Crisp