"Stories come from a collision of ideas." 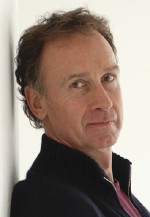 Producer, screenwriter, and bestselling author of THE HORSE WHISPERER, THE LOOP, and THE SMOKE JUMPER, Nicholas Evans says stories come from "a collision of ideas." He always carries a notebook and clips newspaper and magazine articles. "I store them away and make notes. Usually, these are no more than a fraction of an idea. And then something happens, and two or more of these things collide, and you suddenly realize that out of that collision there is a fusion that might sustain a novel."

One idea he was kicking around was the idea of happiness. "Today we've developed a whole notion of a 'right' to happiness, the idea that if something's not working, get a new one. I think we apply that in our personal lives, as well as to our domestic appliances." With that in mind, he thought he'd do a story about the breakup of a long marriage. "I realized that very few couples who married when I did, in my early 20s, were still together, and while I didn't want to write the story of my own divorce, I did want to write something to reflect how much pain you unleash when you open that box--divorce."

The result is his latest novel, THE DIVIDE, which he tells AUDIOFILE, "was not so much a collision as a catastrophic free-fall." An ardent fan of backcountry skiing, Evans says he "rather foolishly," went out alone one morning. "I'd seen a slope on the back side of this mountain, and it looked absolutely perfect. Nobody had skied it, and I knew the snow, if the sun was right, would be good." He climbed the mountain and managed two turns before he fell, "all the way down the mountain--just as the skier does at the beginning of THE DIVIDE. As I lay in the creek bed, with water gushing in great holes all around me, I had an image of myself being embedded in the ice for months until the snow melted. I could have been there forever." Days later, as he nursed his bruises, he thought, "I've got it! That's the front story! I knew the person found in that creek had to be connected to the divorce."

As a writer, Evans has little time to listen to books, but when his father-in-law, who was an avid reader, lost his sight, it was wonderful for him to be able to listen to audio. He says, "I have great respect for the whole audio process." He remembers family journeys in the car when his children were young, listening to Roald Dahl stories. Evans doesn't read aloud from his work on tours and hasn't considered narrating his books. "A lot of my American readers think I'm American. [He's British.] The voice in my head is American when I write, and when I speak it, it sounds wrong." He hasn't listened to THE DIVIDE yet. "But I listened to the voice of the actor who reads it, and he sounds great."--S.J. Henschel