"Audio is always in the back of my mind. I read the book aloud to myself as I go along because if a paragraph bores me to listen to, it will bore the reader." 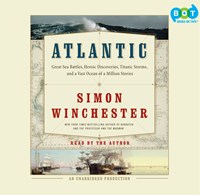 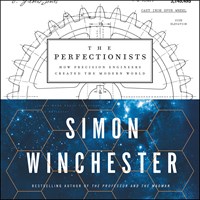 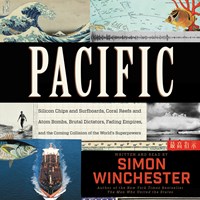 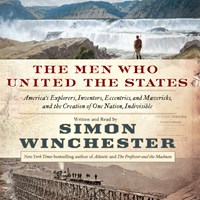 “I’m so pleased to meet you,” says the actor. “I have made a considerable amount of money out of you over the years.”

“Doing what?” asks the author.

“I narrated your first book, THE PROFESSOR AND THE MADMAN.”

In the 17 years since, Winchester has written 11 more critically acclaimed nonfiction books on such topics as the Krakatoa eruption, the 1906 California earthquake, America’s early explorers and inventors, the Atlantic Ocean, and now PACIFIC: Silicon Chips and Surfboards, Coral Reefs and Atom Bombs, Brutal Dictators, Fading Empires, and the Coming Collision of the World’s Superpowers.

Unusual for an author, he has also become the sole narrator of his own books. “It’s an enormously pleasurable part of the publishing process for me. I’ve worked with the producer, Rick Harris, from the beginning, and that’s been a complete joy.” Winchester starts to laugh as he explains, “We’ve been together for so long that I can read a sentence, and Rick doesn’t even have to press his button and say, ‘Let’s do that again.’ I can simply see by the expression on his face and the slightly arched eyebrow that he didn’t like it.”

Actually, it isn’t always the producer who requests a change.

“When you narrate a book, you read from the last-but-one of the edited versions,” Winchester explains. “It’s almost diamond pure, but not quite. So there is an opportunity to make changes to the book if you discover something that’s wrong or grammatically incorrect. As a result, I treat my time in the booth as the final polish of the book. I’ll be doing the audio, and if, for example, I think a word wasn’t the right one to use, I’ll change it. Then I can ring the editors upstairs and ask, On page 370, line 17, will you change ‘a’ to ‘b’? And mercifully, they will.”

Despite the stops, restarts, and final-polish changes, he says, “We always do the recording in four days. We’ve learned that no matter the length of the book, we should allot a week.” His books can range from under 400 to over 500 pages. No matter. “We begin at ten on a Monday morning and always finish just after lunch on Thursday. It’s uncanny.”

The author also values the spoken word during the writing process. “Audio is always in the back of my mind. I read the book aloud to myself as I go along because if a paragraph bores me to listen to, it will bore the reader. In a way, I’ve learned that if it works in audio, it’ll work as a book.”

Thus, he’s especially delighted that the New York Times review of PACIFIC was for the audio version. The book explores 10 overlapping subjects, including the invention of the surfboard, the wonder of Polynesian navigation, and the explosion of the hydrogen bomb. Appearing serendipitously in time for the Paris Climate Talks, the book also examines Western civilization’s exploitation of the ocean’s habitat and its native peoples.

However dark the past, though, Winchester is “very much an optimist.” Describing Hokule’a, a modern Polynesian ship that uses ancient techniques to navigate from Hawaii around the globe to teach people about “living in balance with the island we call Earth,” he says, “If the Pacific is going to be, as I believe, the theater of the future, then allowing its dramatis personae to be largely Pacific people is for the good of the world. They have so much at stake. Pacific countries are right now disappearing. Paris was a turning point. Things must and will change.”

What doesn’t change is Winchester’s enthusiasm for exploration. Fifty-one years after an Oxford University expedition took him to East Greenland and 16 years after a Harper’s Magazine article sent him alone to the West Greenland ice cap for two weeks, he’s working on a proposal for a new book.

“It’s another biggish topic,” he hints. In the way of proposals, it may or may not fly. But not to worry. “I always have two or three ideas floating around,” he says conspiratorially. “The mind is in constant ferment.”--Aurelia C. Scott

October 1999 —Winchester’s book, THE PROFESSOR AND THE MADMAN, concerns one of the great intellectual milestones of recent times, the creation of the Oxford English Dictionary. For those of you who have never heard of the OED, it’s a twelve-volume* lexicon composed on historic principles, carefully tracing the origin and evolution of English words and phrases and giving copious examples. It appeared in 1928 after 70 years of work, almost instantly becoming the ultimate reference on the English language. It still enjoys that status today.

A kind of literary soldier of fortune, Winchester here concentrates on the relationship between OED Editor James Murray and one of his most prolific contributors, Dr. William Chester Minor, a psycho institutionalized after committing a murder. Brief enough at 242 pages, the book boasts the author’s own crisp British inflections in the unabridged audio version. 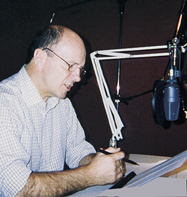 AudioFile spoke by phone with Winchester after his second day in-studio. He’d arrived from covering the Kosovo situation right before going into production. Jet-lagged and reeling from the shocking scenes he’d just witnessed, he read only four hours his first day. “I’ll still get the book done in three days, rather than the five scheduled,” he told us confidently. “Yesterday was a bit wearying. Today we put a lot more into it.”

It was the publisher who asked him to do the voicing. He finds the work stimulating. “I’m having a wonderful time — not the least because there are infelicities in the text that I’m discovering and correcting as I go. Reading aloud brings them out.”

More importantly for the listener, who better than the author can best approximate the speech of the people he quotes? With him behind the mike, we may hear precisely how he experienced those he spoke with and those whose words he reads. Winchester agrees that this enhances the listener’s understanding of how he came to interpret events and personalities.

The best way of telling a story is telling it out loud,” he says. “The audiobook is the apotheosis of the story-telling art.” —Yuri Rasovsky