"Wolfe points to audiobooks as having given poetry 'a huge boost that it really needed. Poetry is, or should be, the music of language, the form of language that almost bypasses the rational center of the brain and goes straight to the emotions, the way music does.' ” 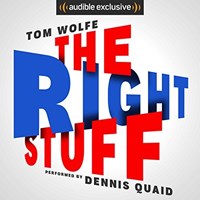 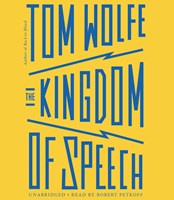 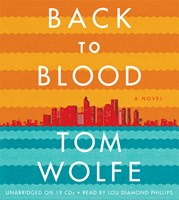 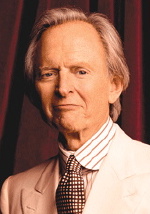 It would have been interesting to be a fly on the wall—or on the leaf of a tree—a few years ago when novelist-essayist-social analyst Tom Wolfe strolled through the dorms and along the verdant terrain of a handful of university campuses to research I AM CHARLOTTE SIMMONS, his latest dissection of American society.

Stanford University and the Universities of Michigan, North Carolina, and Florida were his destinations, along with brief forays among the Ivies—specifically Harvard, Yale, Princeton, and the University of Pennsylvania. He offered to lecture, or give readings, for which—as a quid pro quo—he could wander around and observe (toning down his garb a bit from its usual splendiferous white).

“I told them exactly what I was doing with this novel,” which was to take an impressionable high school grad from an unsophisticated background, a teenaged girl of enviable academic achievement, and place her in (some would say subject her to) today’s American college and—simply stated—see who would transform whom.

As an experienced writer of fiction who has captured the voices and sounds of urban and corporate America, and the father of a Duke University graduate and a Trinity College undergraduate, Wolfe didn’t have to make much up as he shaped situations and fashioned dialogue. Because he promised not to name names or identify individuals, Wolfe found that students “really enjoyed telling an outsider what their life was like. They realize there’s something exceptional in coed dorms and in promiscuous sex in general. They were very open about it all.”

As in the past, the audio publisher selected a proven stage actor—Dylan Baker—to narrate. (Other readers of Wolfe’s books have included John Lithgow and Ron Rifkin.) In each instance, the author says, “I’ve left casting up to the people who know that field a whole lot better than I do.” And he’s had no input into the abridgments.

But decidedly, he is a fan of the aural experience. He thinks back to the radio dramas of yesteryear, like “I Love a Mystery” and the exploits of Jack Armstrong and Tom Mix and the commercials that went with them. (“So take a tip from Tom,” he sings, “and go and tell your mom, hot Ralston’s can’t be beat.”) More recently, he and his family have listened to audiobooks during drives to the country on weekends. “I shouldn’t admit this, but I highly enjoyed a two-hour rendition of MOBY-DICK. You can just imagine what had to be cut out of that. We’ve heard things I probably never would have read, like DRACULA, which was much more interesting than I thought it would be.”

More than that, Wolfe points to audiobooks as having given poetry “a huge boost that it really needed. Poetry is, or should be, the music of language, the form of language that almost bypasses the rational center of the brain and goes straight to the emotions, the way music does.”

Reflecting further on I AM CHARLOTTE SIMMONS, Wolfe voices some concern that a number of book reviewers passed over his central character’s struggle, “the idea that the pressures that would hit her as a result of the chaos of values at a modern college would put her to the test.”

How different is college today from his days at Washington and Lee—then all male—more than a half-century ago?

“I remember girls frantically throwing their beer cans out of the back windows of the cars before they crossed the line onto the campus!

“It was a different world!”—Michael J. Bandler