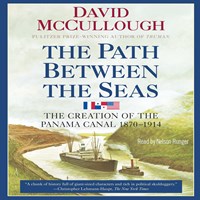 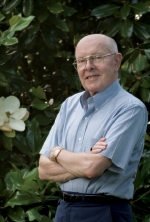 When someone speaks of "lively" history, authors David McCullough and Doris Kearns Goodwin come to mind. The narrator who tops the list to make sure listeners enjoy the history as vividly as written is Nelson Runger. Nelson's audiography includes essential histories and biographies by Joseph J. Ellis, H.W. Brands, Walter Isaacson, James McPherson, and six of McCullough's works, including JOHN ADAMS (2002 Audies winner), TRUMAN , MORNINGS ON HORSEBACK , and THE GREAT BRIDGE .

Nelson answered a "Narrators Wanted" ad for Recorded Books in THE NEW YORKER in 1985. RB's executive producer, Claudia Howard, remembers that Nelson was one of her first narrators hired when when she opened Recorded Books' first Manhattan studio. "Nelson brings such a keen intelligence to the work, coupled with a warm and interesting voice. An audiobook narrator has to have both—a good voice and a good imagination."

Nelson Runger accomplished an amazing feat with his narration of Robert Dallek's NIXON AND KISSINGER , creating a page-turner from the thirty-five-hour recording. Howard knows the difficulty of this task and adds further praise. "Nelson excels at one of the hardest genres in audio, the full-length history. The key to sustaining a narrative story line that covers countless years and vast events, resulting in dozens of hours of listening, is to engage in every single moment on every single page, one image at a time. It requires concentration, patience, and constant attention to the link between performer and audience."

As Nelson sees it, "The narrator should be almost transparent. I want to avoid getting in the author's way and try to identify with the author." In some cases, Nelson has had the personal opportunity to do so. John McPhee is a Princeton classmate, and he and Nelson get together often. Nelson has recorded nearly a dozen of McPhee's books, including IN SUSPECT TERRAIN and UNCOMMON CARRIERS. "John has told me that in his re-writing process he concentrates on the sound. He reads it aloud and works hard to increase the 'soundability.'" This makes McPhee's books a pleasure for both narrator and listener.

Nelson enjoys his appearances at library programs, and even gave his Princeton classmates a treat at a recent reunion on a tour to Washington's Crossing. Nelson entertained the group on the bus ride by reading from David Fischer's WASHINGTON'S CROSSING , which he'd recently completed.

Nelson gives listeners the best experience possible with all sorts of nonfiction—biography, history, natural science, or geology. His engagement engages us. One of AUDIOFILE's reviewers notes, "Nelson Runger has made a career out of reading our nation's past with eloquence and care."—Robin F. Whitten