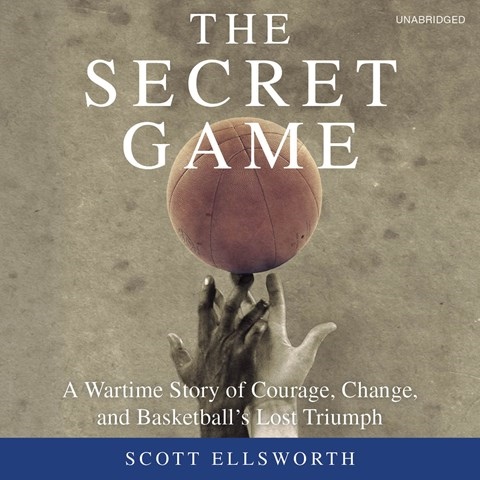 THE SECRET GAME A Wartime Story of Courage, Change, and Basketballs Lost Triumph

Basketball wasn’t always the fast-paced, flashy game it is today, with slam dunks and long-ranging three-pointers. It was a simple game that came of age during the days of Jim Crow. Author Scott Ellsworth’s steady narration has just the right inflections of emotion. His well-researched stories and solid writing carry this book, a series of biographical portraits that culminate in the story of an unpublicized game between all-white Duke University and a little-known black college. Ellsworth’s voice gently shapes the stories of obscure players, and his research into the sport’s well-known vanguards—James Naismith, Phog Allen, John McClendon—is truly fascinating. Ellsworth’s reverence for basketball comes through in his narration as much as it does in his writing. M.B. © AudioFile 2015, Portland, Maine [Published: JUNE 2015]