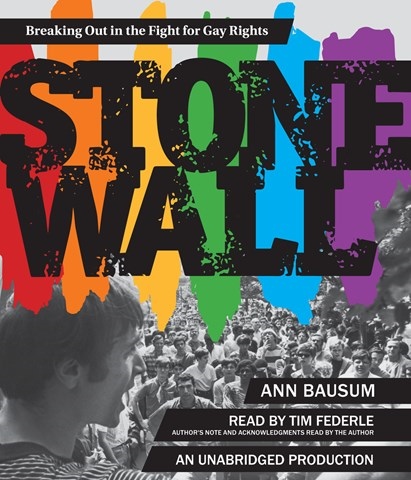 STONEWALL Breaking Out in the Fight for Gay Rights

Being gay in 1969 meant living in fear. It was a criminal offense—you could go to jail or lose your job. Your family might disown you. But as equality movements for women and African-Americans grew, gay activists began to flex their civil rights muscles, too, and on June 28, 1969, when the police raided the Stonewall Inn, a gay bar in Greenwich Village, enough was enough. Bausum's account of the gay rights movement, from Stonewall through the AIDS crisis to the present, is told with heartbreaking candor, and Tim Federle's narration wrings all the emotion from this gripping history. With vocal intensity that is by turns fearful, angry, or touching, Federle takes listeners on this affecting journey through a shameful part of our national story that, while improved, still leaves much to be desired. S.G. Winner of AudioFile Earphones Award © AudioFile 2015, Portland, Maine [Published: MAY 2015]