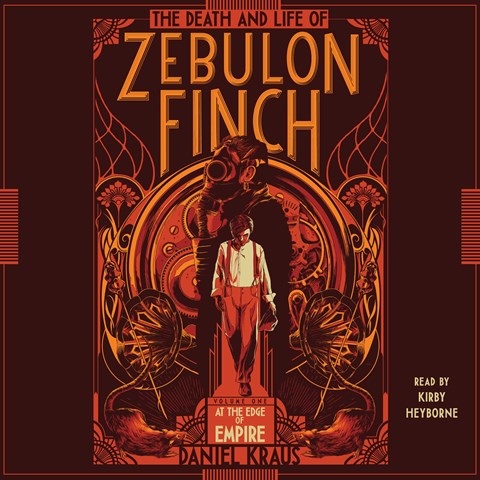 THE DEATH AND LIFE OF ZEBULON FINCH, VOLUME 1 At the Edge of Empire

In 1896, small-time criminal Zebulon Finch, 17 years old, is murdered. Seventeen minutes later he awakens from death, utterly confused. Narrator Kirby Heyborne is wonderful as Zebulon, who is destined to walk the earth for eternity. What has Zebulon done to justify such punishment? In Volume 1 of his autobiography, Zebulon reveals his life up to his murder--and after. Zebulon's first-person point of view allows for some comedy, and Heyborne nails it. Whether he's being sarcastic or tender, sexy or icy, he always delivers fine descriptions of ordinary people, historic events, and the famous and infamous characters Zebulon encounters during his 200 years on earth. The writing is crisp, if oddly disquieting, and Heyborne is impressive as Zebulon casts his acerbic eye upon the world. S.J.H. © AudioFile 2015, Portland, Maine [Published: DECEMBER 2015]