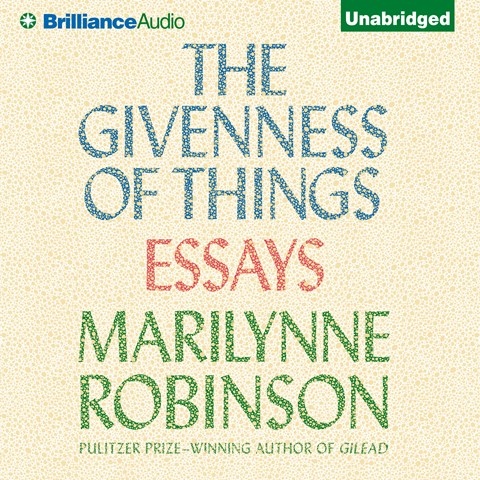 THE GIVENNESS OF THINGS Essays

Coleen Marlo may have the most beautiful and rich voice in the audiobook world. It's always a pleasure to listen to her. When Marilynne Robinson focuses on contemporary concerns, this production all comes together--with Robinson's thoughtfulness combined with Marlo's smooth and sincere reading. Robinson is a Christian, but she's frustrated by people she considers to be hijacking her faith by demonizing the poor, promoting the death penalty and instilling fear where it doesn't belong rather than focusing on Christian charity and grace. However, the majority of Robinson's essays on metaphysics, Calvinism, philosophy, and the humanities are so intellectual and dense that Marlo's even tones don't help to illuminate the complicated ideas. A.B. © AudioFile 2016, Portland, Maine [Published: JUNE 2016]