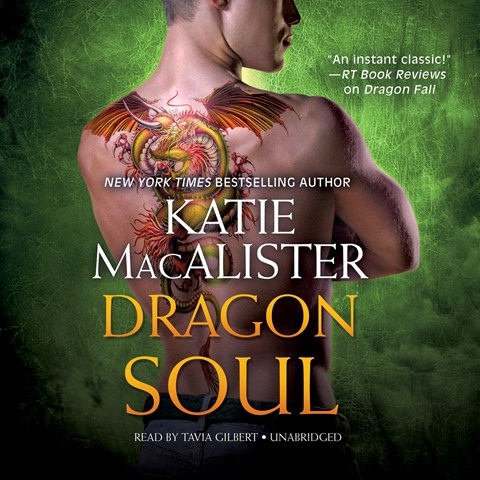 Tavia Gilbert narrates the third book in MacAlister’s Dragon Fall series with vim, verve, and vigor. Sophea Long is escorting her elderly client across Europe to Egypt, where she’ll cruise down the Nile. At the same time, Rowan Dakar has been hired to break the object of power that still holds sway over the Dragonkin. This installment has a slightly more sober tone than the previous volumes, dealing as it does with Sophea’s grief over her husband’s death and Rowan’s guilt at his part in the death of the Red Dragon Sept. Nonetheless, Gilbert perfectly captures the plentiful humor in the plot and skillfully gives voice to a large cast of characters with a multitude of accents. Highly recommended for fans of humorous paranormal romance. K.M.P. Winner of AudioFile Earphones Award © AudioFile 2016, Portland, Maine [Published: APRIL 2016]