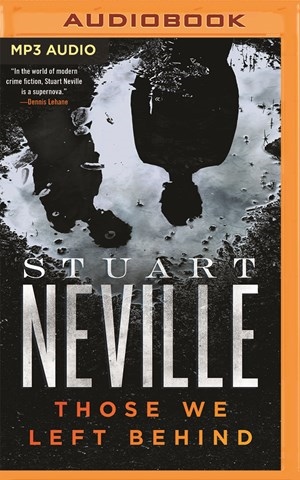 THOSE WE LEFT BEHIND DCI Serena Flanagan, Book 1

It makes sense to have the dialogue in an audiobook rendered in a regional accent to give a sense of place. To have the entire text delivered in an accent so far from standard pronunciation that the listener can't follow the story does not. Stuart's previous Belfast (Ireland) novels have many audio fans, but Michelle Ferguson, new to the series, is here so busy pronouncing everything in dialect that the narrative gets lost. The two female protagonists, DCI Flanagan and probation officer Paula Cunningham, are not well distinguished from each other aurally, nor are the two murderous young brothers at the heart of Stuart's psychological puzzle, and the more minor characters never become real to us in Ferguson's rendering. B.G. © AudioFile 2016, Portland, Maine [Published: JULY 2016]