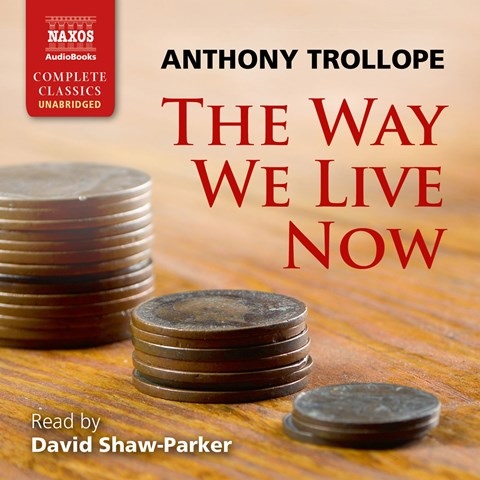 THE WAY WE LIVE NOW

When Augustus Melmotte moves to London in a blaze of splendor, the English upper class is both confused and awed by this upstart with an enigmatic past. Trollope's 1875 novel deals with many vices of the period including financial scandal, social climbing, and arranged marriages. British actor David Shaw-Parker's almost iambic cadence makes his narration of the novel pleasant to the ear. His vocal characterizations are especially entertaining. From Felix Carbury's unconcerned tone to Melmotte's imposing manner, Shaw-Parker captures the essence of each character. When he voices American businessman Hamilton K. Fisker, his American accent is so convincing that he sounds like a different narrator entirely. Although the novel itself is lengthy, Shaw-Parker holds the listener spellbound. D.M.W. © AudioFile 2016, Portland, Maine [Published: JUNE 2016]