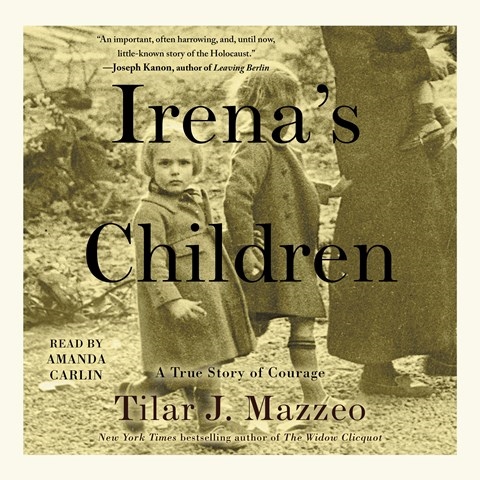 IRENA'S CHILDREN The Extraordinary Story of the Woman Who Saved 2,500 Children From the Warsaw Ghetto

Amanda Carlin's steady narration reveals the courageous story of Irena Sandler, the Polish hero who spearheaded the effort to save 2,500 Jewish children during WWII. Listeners who don't want to hear gruesome details of wartime cruelty may find that Carlin's gently modulated delivery makes the brutality tolerable. Her voice has a wistful edge suited to the narratives of Irena, several of the Resistance leaders she "organized like a general," and Jewish victims of the German occupation in Poland. Her narration is mostly unaccented, except for the sparse dialogue, for which she uses a Polish accent sparingly. Carlin humanizes this "feather of a person with an iron spirit" as compassionate, flawed, decent, and humble. Sandler concludes, "I have qualms of conscience that I did so little." R.T. © AudioFile 2016, Portland, Maine [Published: OCTOBER 2016]