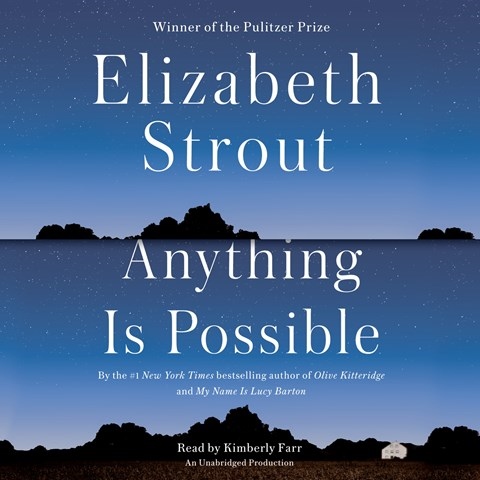 Through a series of linked stories, Strout revisits the small-town world she introduced in MY NAME IS LUCY BARTON. The citizens, now older but not necessarily wiser, face life's uncertainties as best they can. In an impressive encore performance of Strout's prose, Kimberly Farr successfully mines the essence of each flawed character, giving hope and pain equal billing without succumbing to theatrics. Farr teases out the conflicting emotions of a mother and daughter who are reunited after years apart, the fragility of a Vietnam War veteran on the brink of a PTSD flashback, and the guilt a man feels over his father's long-ago sins. Farr's presence melts into the background, allowing the stories themselves to take center stage. This is an audiobook to get lost in. C.B.L. Winner of AudioFile Earphones Award © AudioFile 2017, Portland, Maine [Published: APRIL 2017]