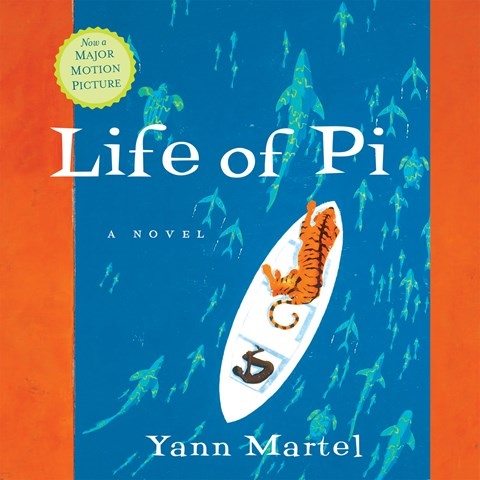 Adrift on the wide Pacific in a 26-foot lifeboat should prove challenge enough, but to survive with a royal Bengal tiger for sole companion stretches belief. Nonetheless, 16-year-old Pi Patel, son of a zookeeper from Pondicherry, India, manages it for 227 days by taming not only the tiger, but his own wild imagination and whipping both into service. Martel uses two narrators for his mad tale: Pi reading his journal and what appears to be an objective neighbor some years later. The neighborâ€™s narrative, read by Alexander Marshall, is brief and wooden, but necessary to contrast with Piâ€™s wildly implausible adventure. Jeff Woodman reads Piâ€™s journal and the bulk of the story. His range is astounding. He is at once the salty French cook, two oddly paired Japanese investigators, a Catholic priest, a Muslim imam, and of course the irrepressible Pi, each with his own distinctive accent. Woodman reads with an almost childlike delicacy and simplicity that lend credibility to the wisdom implicit in this fanciful tale. Both story and reading delight on every level. P.E.F. Winner of AudioFile Earphones Award, 2005 YALSA Selection Â© AudioFile 2003, Portland, Maine [Published: JUN/JUL 03]