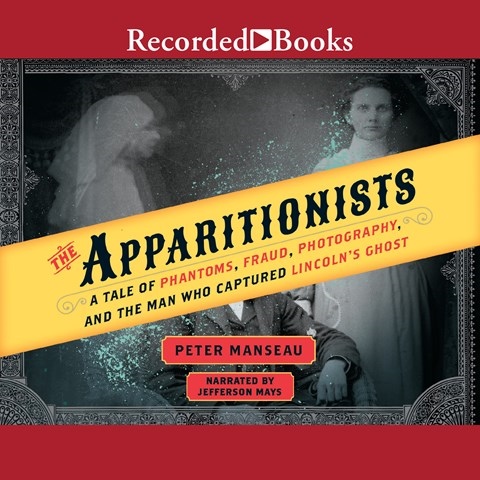 THE APPARITIONISTS A Tale of Phantoms, Fraud, Photography, and the Man Who Captured Lincoln's Ghost

Narrator Jefferson Mays delivers this carefully researched record of the early days of photography as though it were choice fiction. When William H. Mummler began his sideline in photography in 1862, he noticed a ghostly image in one of his photographs. In Mummler's society it was fashionable to dabble in spiritualism, and he began offering his "spirit photographs" to the public. Belief that the dead remained nearby was rampant, so expecting to see spirits in the ether, visible only to the camera, made perfect sense. Perceived as a threat to Christian doctrine as well as an exploiter of the public, Mummler was arrested, tried for fraud, and eventually cleared due to lack of evidence. Mays keeps his distance, displaying appropriate restraint despite outrageous Victorian allegations. S.J.H. © AudioFile 2017, Portland, Maine [Published: NOVEMBER 2017]