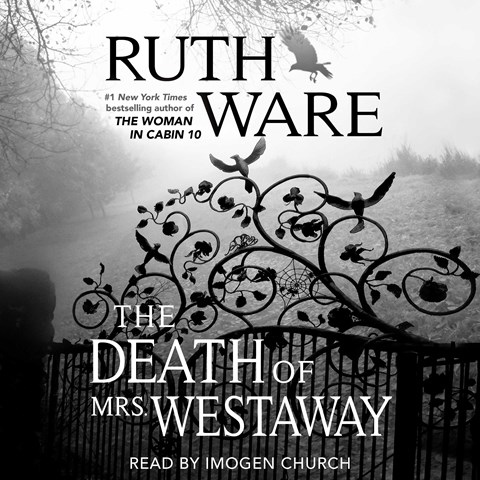 THE DEATH OF MRS. WESTAWAY

Imogen Church is a lively and versatile narrator. Hal reads fortunes on Brighton Pier on the English south coast. Struggling to make ends meet, she receives a letter from a solicitor telling her she is a beneficiary in her late grandmother's will. But Hal's only known grandmother is long dead. Pursued by a ruthless loan shark, she is desperate enough to think she can employ her skills as a reader of people to pass herself off as the true beneficiary. Church’s narration is only slightly compromised by the gruff voices she gives to some of the characters. She captures the vulnerable but determined Hal beautifully. As soon as Hal sets foot in the brooding ancestral home in Norfolk, she is embroiled in family secrets and beset by a sinister housekeeper who makes Daphne du Maurier's Mrs. Danvers seem like employee of the month. C.A.T. Winner of AudioFile Earphones Award, 2018 Best Audiobook © AudioFile 2018, Portland, Maine [Published: JUNE 2018]