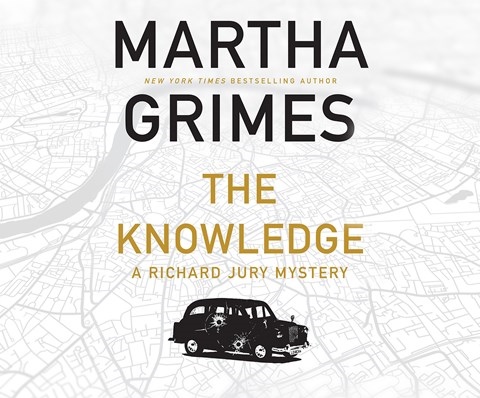 This well-realized novel, narrated by Steve West, was inspired by "The Knowledge"--the encyclopedic information about the city of London that its most prestigious cab drivers possess. When a couple is murdered outside an exclusive casino, Detective Inspector Richard Jury calls his usual sidekicks, Melrose Plant and Marshall Trueblood, into action. West makes both sound appropriately aristocratic and witty. Shortly after, when a cab driver is kidnapped by the murderer, he secretly alerts fellow cabbies and street kids (like the Baker Street Irregulars) to follow his car. Listeners will feel they're in the cab and at the airport when the killer departs. Most riveting is 10-year-old Patty Haigh, who manages to board the flight and follow the killer all the way to to Kenya. West's delivery of her street smarts is mind-blowing and hilarious. Genuine sound effects and West's impressive accents add to the listening pleasure. S.G.B. © AudioFile 2018, Portland, Maine [Published: MAY 2018]