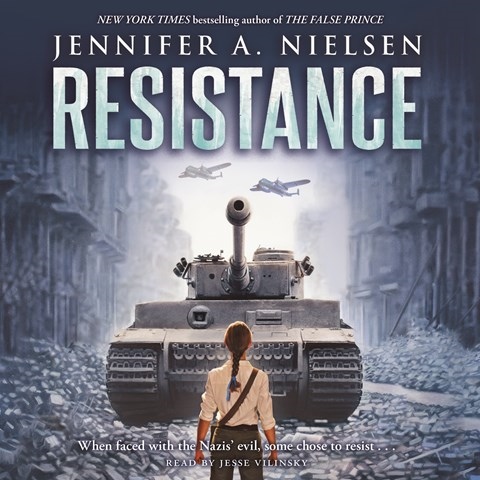 by Jennifer A. Nielsen | Read by Jesse Vilinsky

The story of Chaya Lindner's defiance as part of a Jewish resistance group in Nazi-occupied Poland will grip those who listen to this action-packed historical fiction. Jesse Vilinsky's narration features a commanding, rebellious tone as Chaya smuggles people from ghettos and terrorizes military targets. Vilinsky is also nimble enough to be tender and emotive when describing the horrific suffering of Chaya's loved ones. The new recruit Ester's initial naïveté and later act of self-sacrifice offer distinct vocal contrast with Chaya's voice. Vilinsky's pronunciations of Yiddish, German, and Polish words provide added richness to the setting. In the afterword, author Nielsen reads about the lives of real-life resistance fighters, adding a another level of depth to this engaging audiobook. E.A.N. © AudioFile 2019, Portland, Maine [Published: MARCH 2019]