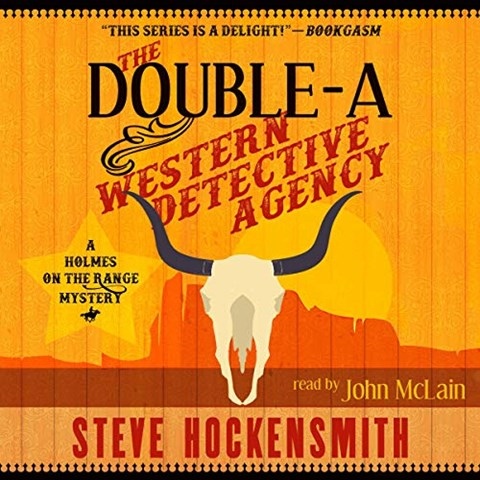 THE DOUBLE-A WESTERN DETECTIVE AGENCY Holmes on the Range, Book 6

Narrator John McLain effectively channels storyteller Big Red, who teams up with his brother, Old Red, to serve as private investigators, Sherlock Holmes-style, in the Old West. McLain's delivery calls to mind the world of nineteenth-century cowboys as the new Double-A Western Detection Agency gets its first case, which involves cattle rustlers in New Mexico. The situation proves more complex than the pair of detectives expect, and they end up having to investigate the murder of the local marshal. McLain makes the risky but ultimately successful decision to mispronounce words at times. This technique gives color to his performance and makes listeners laugh out loud throughout. V.M.G. © AudioFile 2019, Portland, Maine [Published: APRIL 2019]