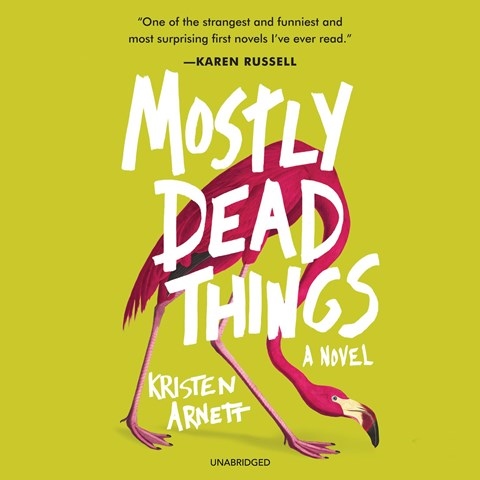 Narrator Jesse Vilinksky gives a wistful performance of Arnett's debut novel. After her father's suicide, Jessa-Lynn Morton takes over running the family taxidermy shop, drinks too much, and ignores her own grief as well as the disappearance of her brother's wife, Brynn, who was also Jessa's first love. It's a dark story filled with damaged characters, and Vilinsky's melancholy narration highlights the fact that Jessa is deeply depressed, a reality Jessa herself can't acknowledge. Other characters, mostly members of the Morton family, are easily distinguishable, thanks to Vilinksy's fully developed voices. Some of the novel's wry humor is lost in Vilinksy's performance, but she fully captures the emotional core of this story about family and the strange contours of grief. E.C. © AudioFile 2019, Portland, Maine [Published: JULY 2019]