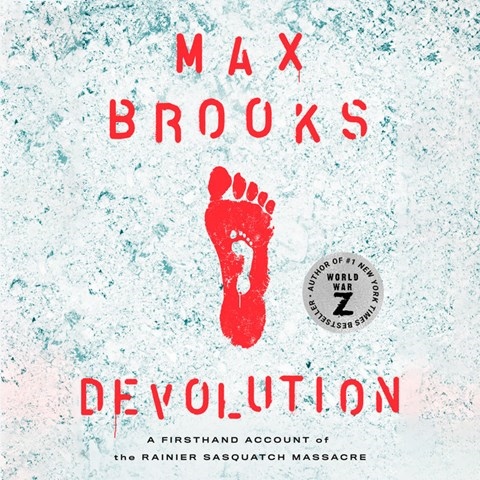 DEVOLUTION A Firsthand Account of the Rainier Sasquatch Massacre

In this fictional yet eerily believable audiobook, Washington's Mount Rainier erupts, causing several displaced and hungry Sasquatches to descend on a remote ecovillage called Greenloop. An excellent full cast--including the author, notable film and television stars, and well-known radio personalities--delivers the story, which consists of found documents, transcripts, book excerpts, and interviews. Each narrator does a credible job and contributes positively to the overall narrative. Among the ensemble, Judy Greer is the clear standout. She narrates much of the story, portraying Kate Holland, whose found journal accounts for most of the massacre's documentation. Greer's performance captures the gamut of Kate's emotions, starting with her bubbly excitement upon first arriving in Greenloop and moving on to her unease, terror, and, eventually, steely resolve to survive at any cost. A.T.N. © AudioFile 2020, Portland, Maine [Published: JULY 2020]