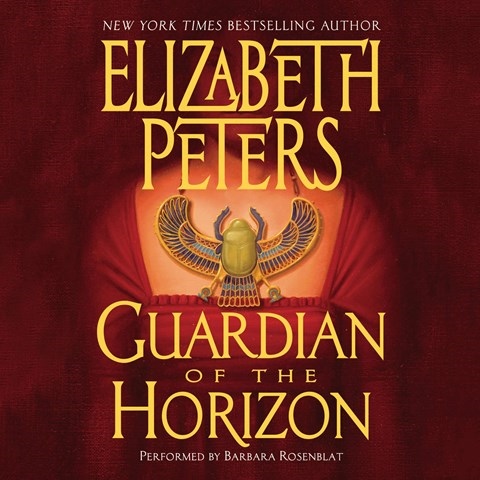 GUARDIAN OF THE HORIZON

A recently discovered journal of Egyptologist Amelia Peabody explores the missing episode (1907-1908) in the chronicles of Peabody; her scholar husband, Emerson; their son, Ramses; and their ward and Ramses's future bride, Nefret, taking them back to the Lost Oasis to help their friend, King Tarek. In this, the sixteenth book in the Peabody-Emerson series, Grandmaster of the Mystery Writers of America Elizabeth Peters plunges her intrepid family into a ruse involving kidnapping, murder, and life-threatening danger, sparked by Amelia's quick-witted dialogue and Emerson's gruff grumbles of wisdom. The incomparable Barbara Rosenblat invests each character with a unique voice and personality. There is never confusion as to which character is being portrayed, and Rosenblat's timing is, as usual, flawless. If silent film star Lon Chaney was "the man of a thousand faces," Barbara Rosenblat is "the woman of a thousand voices." M.T.B. (c) AudioFile 2005, Portland, Maine [Published: FEB/ MAR 05]