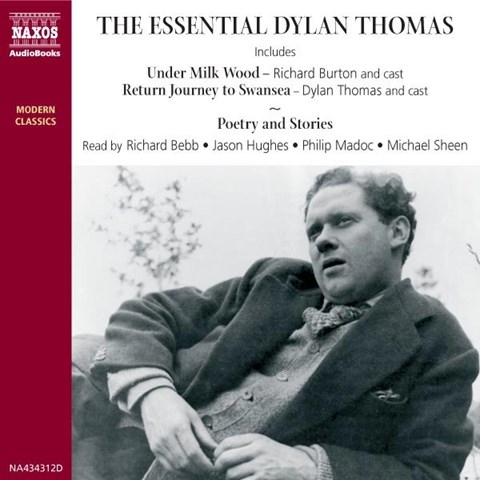 In the mid-twentieth century, Dylan Thomas (1914--53) was at once excoriated for his wild booze-drenched antics and admired for his distinctive poems, essays, stories, and lectures. Saturated in the musical speech of Wales, they dazzle with lush imagery, cascading sonorities, heady earthiness, and bold flourishes. This aural collection exemplifies the traits that continue to gain him rapturous fans, particularly for his poetry. The radio play UNDER MILKWOOD, his most famous work, is represented here by the legendary 1954 BBC production starring Richard Burton with an all-Welsh cast. Burton took the role that Thomas himself would have played had he not died just two months before the broadcast. In overripe stentorian tones that seem the perfect match to his writing, Thomas frequently recited his own works on radio and in personal appearances. This anthology includes vintage recordings of the author reading various pieces in his inimitable style, including “Do Not Go Gentle into that Good Night,” which no one can deliver as movingly as he. Four seasoned Anglo-Welsh actors divide the remaining selections among themselves. Students and others coming to Thomas for the first time are well advised to start with this volume; those familiar with his works do not need to be told of the rewards awaiting them here. Y.R. Winner of AudioFile Earphones Award 2006 Audie Award Finalist © AudioFile 2005, Portland, Maine [Published: AUG/SEP 05]