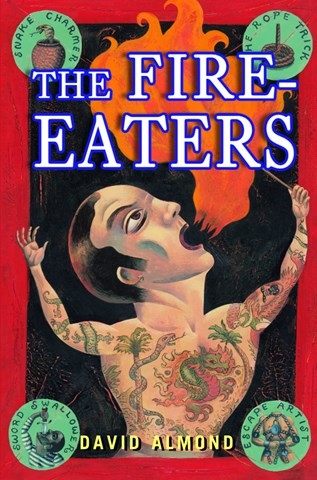 It’s September 1962--the time of the Cuban Missile Crisis--and Secretary of State Dean Rusk declaims to a globe perched on the brink of nuclear annihilation, “We’re standing at the gates of hell.” Just so, metaphorically speaking, is the existence of Bobby Burns in the coal-mining British countryside of Keely Bay, as depicted by David Almond in this unique young adult novel. Daniel Gerroll’s powerful reading captures the mystery of the three leading characters: Bobby, the working-class schoolboy narrator who is just beginning to comprehend the menace in the world; McNulty, the fire-eater/ escapologist, whose scarred and tattooed body and growling commentary depict a weighty symbolism; and Daniel, the genteel classmate, whose passion for justice infects Bobby, leading him into new psychological and philosophical territory. By turns earnest, breathy, terrifying, and reverent, Gerroll’s reading is compelling, his pacing masterful, his narration entirely faithful to the emotional truth of Almond’s outstanding text. T.B. Winner of AudioFile Earphones Award © AudioFile 2004, Portland, Maine [Published: OCT/ NOV 04]