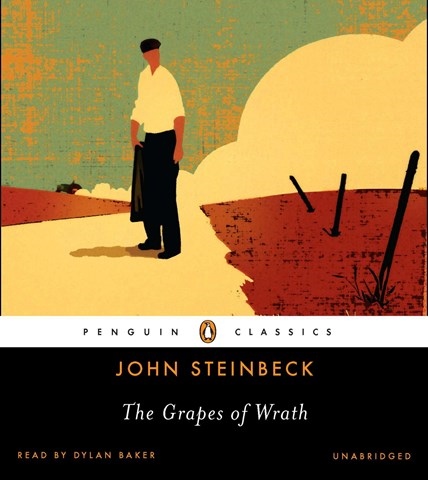 THE GRAPES OF WRATH

Winner of the Pulitzer Prize in l940, this famous protest novel is a natural for audio. The story is told almost entirely in the country vernacular of the destitute workers of the 1930's--some 300,000 strong--who had been driven from their farms and were pouring into California to face hunger, squalor and humiliation. (An inept narrator, reading their dialogue, could easily have made them sound like the Beverly Hillbillies.) Instead, Dylan Baker's sensitive interpretation has given them the dignity--even the nobility--that Steinbeck intended. He has also avoided another serious pitfall: overdramatizing some of Steinbeck's speeches in the last half of the book, avoiding what the Joads called "a preacher voice." The listener is hardly aware of occasional lapses into sentimental prose as Steinbeck delivers his many impassioned sermons against the selfishness and greed of the rich. Altogether, this is an outstanding performance; John Steinbeck would have relished it. J.C. Winner of AUDIOFILE Earphones Award ©AudioFile, Portland, Maine [Published: FEB/MAR 99]