Home»Reviews»WHEN WILL THERE BE GOOD NEWS? 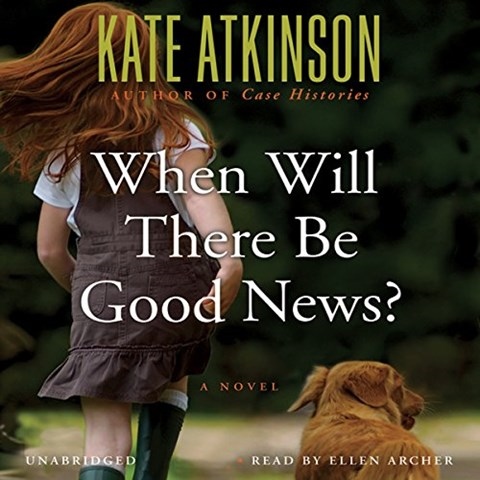 WHEN WILL THERE BE GOOD NEWS?

Ellen Archer definitely has her work cut out. Kate Atkinson's latest novel featuring Jackson Brodie, private detective, weaves together multiple characters and stories that eventually converge. Joanna Hunter, GP and sole survivor of a family massacre 30 years earlier, goes missing, along with her baby. Reggie, her "mother's help," believes she’s been kidnapped. Add to the mix a train crash, drugs, mistaken identity, a couple of dogs, a whole lot of thugs, and even a tutor who is rapture-ready. Atkinson successfully juggles all the balls, and Archer is game. Archer's performance is spirited, hilarious, nuanced, and stunning; characters are distinct, and accents are convincing. Especially endearing is Archer's interpretation of Reggie, whose precociousness and Scots brogue give personality to her constant chatter and badgering of the authorities. A.B. © AudioFile 2008, Portland, Maine [Published: DECEMBER 2008]