Home»Reviews»CURSE OF THE BLUE TATTOO 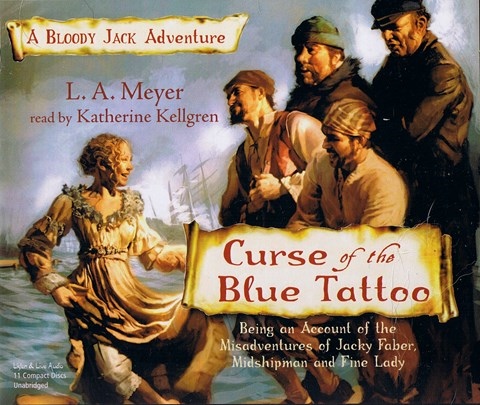 With sass and song, Katherine Kellgren portrays Jacky Faber as schoolgirl and part-time tavern performer. Fighting off pirates in BLOODY JACK barely prepared Jacky for the battles she faces after being given the heave-ho as midshipman on the HMS DOLPHIN, losing her true love, and being sent to a Boston boarding school. Kellgren's terrific portrayal of Jacky’s reluctant transition to finishing school extends to the cast of snobbish classmates, low-life Bostonians, sailors, prostitutes, a creepy constable, and a mad minister who is a descendant of Cotton Mather. Jacky's endless propensity for trouble leads the listener on a rollicking journey through 1800s America with the promise of more to come as she boards a whaling ship at novel's end. D.P.D. Winner of AudioFile Earphones Award, 2009 Odyssey Honor, 2009 Audies Winner © AudioFile 2009, Portland, Maine [Published: FEBRUARY 2009]