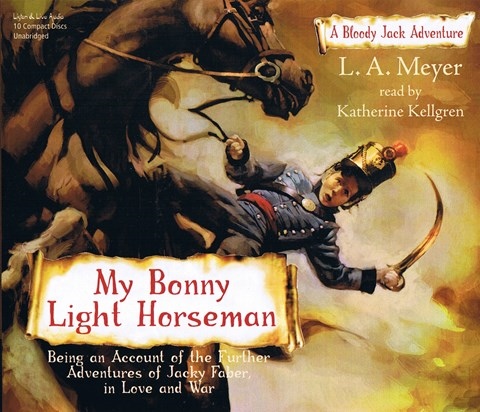 Katherine Kellgren turns 16-year-old magnet-for-trouble Jacky Faber into the most engaging, cheeky girl in YA literature. Kellgren's risk-taking heroine spills over with personality, ingenuity, wile, wit, and wisdom. This time, Jacky—former ship's captain, pirate, riverboat entertainer, wanted criminal, and faithful friend—is captured by the French and beheaded. Or so it seems. In fact, our heroine is coerced into becoming a spy, masquerading as a dancer, a faux prostitute, and a soldier in Napoleon's army. As usual, she flirts outrageously with handsome young men, all the while remaining faithful (sort of) to her beloved Jaimy. Kellgren's sense of timing, nuance, and singing are the best reasons for meeting Jacky on audio. For maximum entertainment, listen to the Bloody Jack series in sequence. S.J.H. Winner of AudioFile Earphones Award © AudioFile 2010, Portland, Maine [Published: MARCH 2010]