Home»Reviews»IN THE BELLY OF THE BLOODHOUND 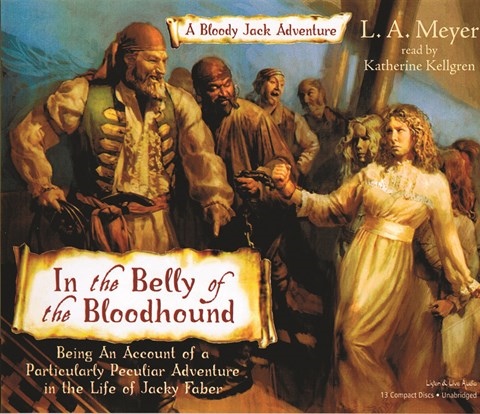 IN THE BELLY OF THE BLOODHOUND Bloody Jack #4

Labeled a pirate by the King of England and once again losing her beloved Jamie, series protagonist Jacky is lying low at the Lawson Peabody School for Young Ladies, a respectable finishing school for the daughters of American aristocrats. On a boat trip out of Boston Harbor, Jacky and her classmates are kidnapped by white slavers and stowed below decks on the bad ship BLOODHOUND, headed for the Barbary Coast and the Arab auction blocks. Katherine Kellgren takes listeners on a rollicking action-packed journey as irrepressible Jacky outwits a hardened crew and turns a bunch of privileged princesses into a formidable fighting force. Jacky encounters thrill-a-minute dangers—from a near-hanging to a brutal whipping, from near-starvation to dining on the ship's plentiful rat population. Kellgren delivers a bravura performance. S.J.H. Winner of AudioFile Earphones Award, 2010 Audies Finalist © AudioFile 2009, Portland, Maine [Published: SEPTEMBER 2009]