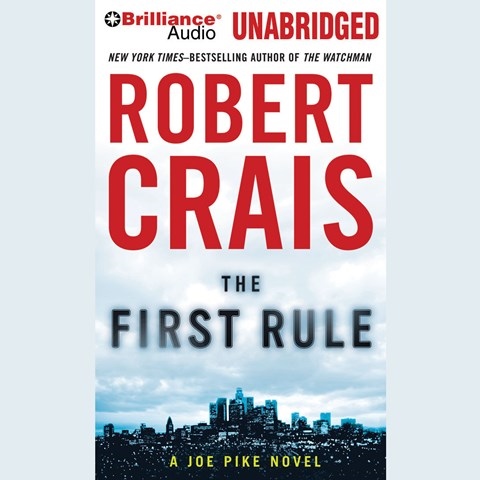 Joe Pike is the guy who protects you from things you'd rather not know. He's a mercenary with a strong sense of justice. In an apparent home invasion/robbery, one of Pike's former team members is executed, along with his wife, sons, and nanny. With the precision of a military maneuver, Pike sets out for payback. Robert Crais joins the ranks of author-narrators who can keep listeners enthralled. His Pike—dark, cold as stone—has a deep, menacing voice. While Crais doesn't attempt the Eastern European accents of many of his characters, his carefully constructed dialogue fills in the missing atmosphere. Serbian crime lords, sex trafficking, illegal guns, and a kidnapped baby add to the tension. THE FIRST RULE is first-rate. S.J.H. © AudioFile 2010, Portland, Maine [Published: FEBRUARY 2010]