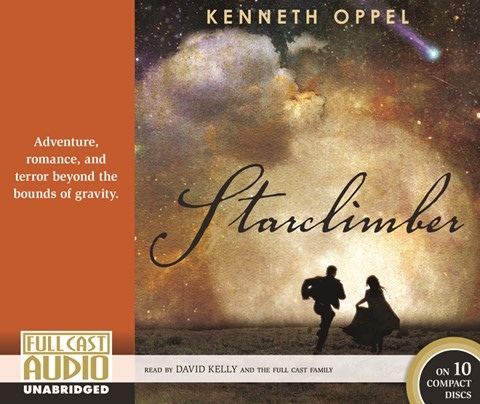 The action never stops in this hair-raising adventure. This time Matt and Kate are on a trip to outer space. Even those who haven’t listened to the first two books, AIRBORN and SKYBREAKER, will become entranced by the likable and quirky characters. David Kelly creates a sympathetic portrayal as student pilot Matt struggles to prove his mettle and hold on to his girlfriend Kate’s affection. There’s never a dull moment as he describes his daredevil maneuvers and the strange sights of the upper atmosphere. Voices for phlegmatic scientist Dr. Turgenev, buffoon Sir Hugh, and the other space voyagers add depth to the performance. The combination of a great story and distinctive narrations makes this selection a “don’t miss.” C.A. Winner of AudioFile Earphones Award © AudioFile 2010, Portland, Maine [Published: JULY 2010]