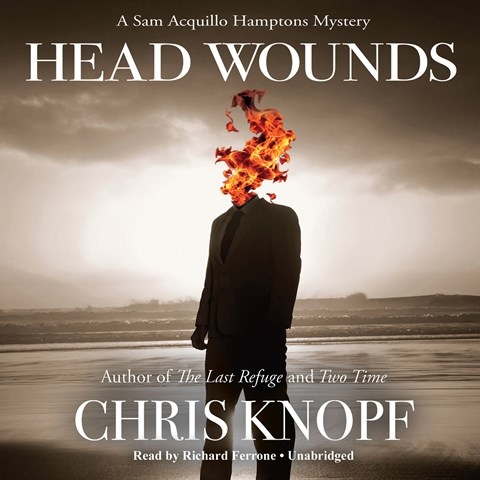 The more one listens to Richard Ferrone narrate HEAD WOUNDS, the more one appreciates how well he crafts the novel’s dialogue. Chris Knopf’s murder mystery is an excellent story all by itself, the account of how former boxer and former corporate executive Sam Acquillo finds himself the prime suspect in the murder of a local builder in the Hamptons. He responds resourcefully—by recruiting various people to help him find the real killer. Further, the richness of Ferrone’s portrayal of Acquillo—a unique soul who reads Kant and has a dog named Eddie van Halen—makes this performance especially outstanding. Of course, it doesn’t hurt that Knopf has written a thoroughly entertaining story with excellent plot twists that leave the listener guessing, and ultimately very satisfied. D.J.S. Winner of AudioFile Earphones Award © AudioFile 2010, Portland, Maine [Published: JUNE 2010]