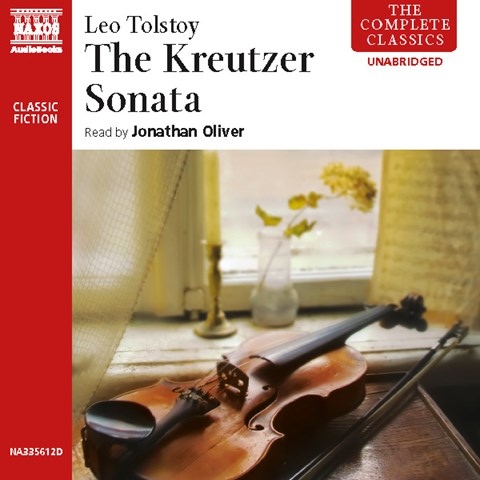 Less a story than a philosophical tract, this tale is told to a chance listener on a railway journey by a man who has murdered his wife and been exonerated on the grounds that she was unfaithful and deserved it. Tolstoy writes the murderer Pozdnyshev as distraught, given to uttering a strange emotional cry, which Jonathan Oliver renders brilliantly. Oliver’s Pozdnyshev, high-strung and tormented, is convinced that his crime was caused by the nature of modern marriage and that any true Christian, married or not, must live celibate or risk his mortal soul. Since Pozdnyshev strikes the listener as delusional, but Tolstoy’s afterword makes clear that he is the author’s mouthpiece, this makes for a strangely dissonant experience, if a marvelous piece of acting. B.G. © AudioFile 2010, Portland, Maine [Published: NOVEMBER 2010]