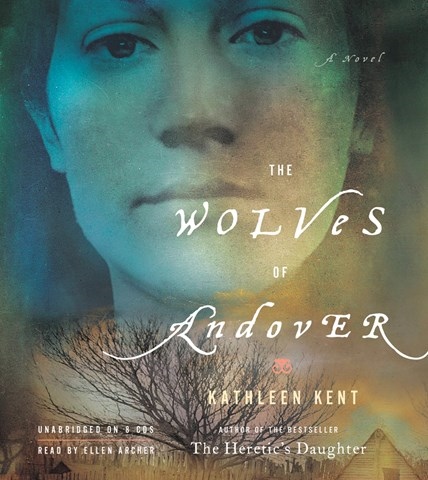 THE WOLVES OF ANDOVER

Kathleen Kent’s meticulous research combines with Ellen Archer’s talent for accents and drama to bring seventeenth-century Massachusetts to life. Archer’s Welsh-accented portrayal of indentured servant Thomas Carrier helps listeners imagine the tall, silent man who has a mystery in his past. Likewise, Archer aids the listener in imagining Martha Allen—fiercely independent, unmarried—who has been sent to comfort her pregnant cousin and capture a husband. At the beginning of the book Acher’s vivid portrait of Cromwell’s vicious murder of Charles I during the English Civil War sets the scene for British assassins bound upon revenge who are hunting Thomas in America. Romance, adventure, suspense, and history in this prequel will have listeners seeking out Kent’s HERETIC’S DAUGHTER for more. S.W. © AudioFile 2011, Portland, Maine [Published: MARCH 2011]