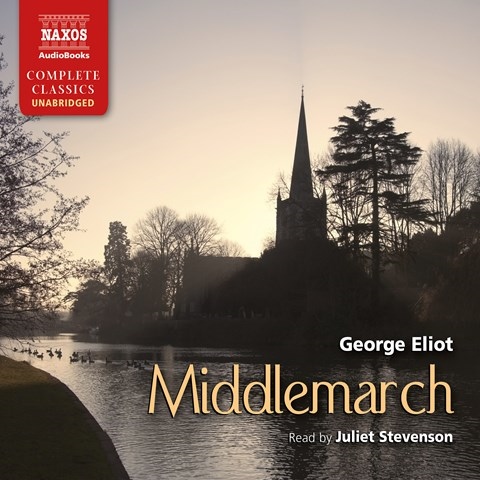 Juliet Stevenson is unmatched in her narration of George Eliot’s sweeping novel, which puts a lens to the fictitious English town of Middlemarch. Eliot’s complex plot takes the listener into various households and lives, revealing scandal, secret longings, and unexpected ties. Stevenson’s pleasant, friendly voice makes this relatively lengthy audiobook a listening delight. She enhances the narrative passages through her consistent enthusiasm and ease of language. Capturing the voices of Eliot’s characters adeptly, Stevenson shifts flawlessly from gruff elderly bachelors to flirtatious young women. She displays a keen ability for a range of British accents, perfectly sorting the servants from the aristocracy and everyone in between. Stevenson’s execution heralds the triumph of female spirit that Eliot embodies within this literary classic. D.M.W. © AudioFile 2011, Portland, Maine [Published: JULY 2011]