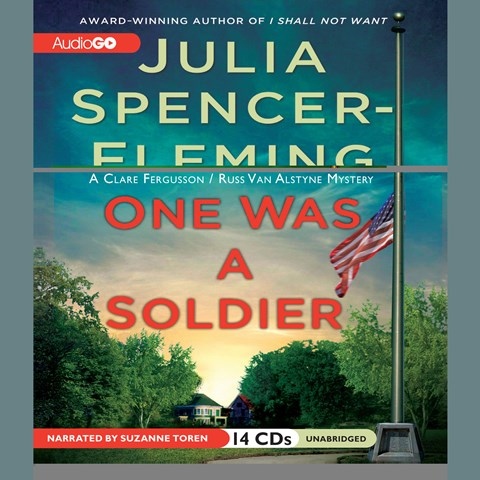 ONE WAS A SOLDIER

In an interesting twist on this effective series, half the population of the town of Miller’s Kill, New York, including Claire Ferguson, the Episcopal priest who is also an Army helicopter pilot, have come home from Iraq with some form of post-traumatic stress disorder. The walking wounded attend a veterans’ therapy group, and when one of their number dies and police assume suicide, her mates from the group take matters into their own hands. Suzanne Toren performs with her usual great strengths and small weaknesses. Her male voices sound uncomfortably strained, and her accents aren’t awfully convincing, but her passion and pacing are marvelous, and she admirably keeps her composure during some really embarrassing sex scenes. Police Chief Van Alstyne proposes to Claire; fans will be pleased. B.G. © AudioFile 2011, Portland, Maine [Published: JUNE 2011]