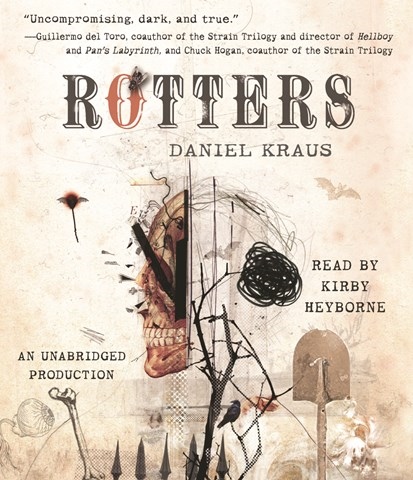 His mother's untimely death forces 16-year-old Joey Crouch to travel from Chicago to a small town in Iowa to live with Harnett, the father he has never known. Incessantly bullied by teachers and students, Joey discovers the awful truth behind the foul odor that permeates the shack he shares with Harnett. Far from being the "Garbage Man's" son, as his classmates believe, Joey learns that he is heir to the ancient tradition of grave robbing. Kirby Heyborne expertly plumbs the depths of Joey's despair and growing fascination with the grotesque trappings of his new occupation. As Heyborne relentlessly draws the listener into the ghastly details of the grave, he creates distinctive, bone-chilling voices for Harnett, the evil Boggs, and the community of diggers in this shocking YA novel. S.G. Winner of AudioFile Earphones Award, 2012 Odyssey Award Winner © AudioFile 2012, Portland, Maine [Published: FEBRUARY 2012]