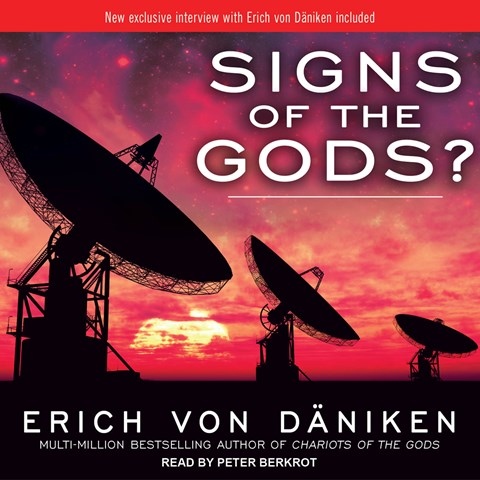 SIGNS OF THE GODS

While recognizing the existence of a supernatural divinity, scientist and proselytizer Erich von Daniken makes yet another compelling case for extraterrestrial beings having visited earth in the distant past and having become many of humankind’s gods of myth and legend. Peter Berkrot delivers a professional, academic-sounding narration that provides enhanced credence to the well-written and well-researched text. His authoritative style is especially valuable, given the number of skeptics who line up against von Daniken’s theories. Berkrot’s mellow intonation and impeccable timing deliver all the excitement and mystery that have captivated the author’s readers over the years. This is an important work for all followers of von Daniken, believers in the theories of ancient astronaut visitations, and lovers of the nexus of science and fiction. M.C. © AudioFile 2011, Portland, Maine [Published: DECEMBER 2011]