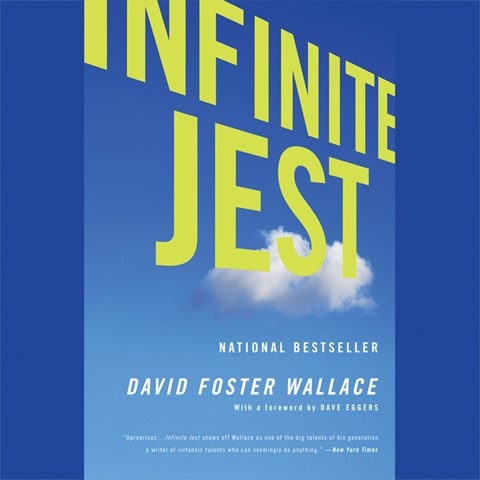 INFINITE JEST may qualify as the "great American novel," especially as it embodies a mythic scale of emblematic writing about America's obsession with entertainment, addiction, and addiction to entertainment. The audiobook version makes this 1,300-page tome more accessible to a wider audience. Sean Pratt's performance is cleverly modulated—underscoring Wallace's wild genius and somewhat futuristic exploration. Pratt boldly portrays the main character's internal irony, sadness, turmoil, and brilliance while ably performing other characters' diverse dialects and accents. Many JEST devotees have criticized the audio publisher’s decision to include the book's 395 end notes as a downloadable PDF file instead of having them read aloud. I did not stop my car to read the digressions, nor did I see the value in reading them at another time, when their relevance would have been lost. A dilemma to be sure—but not one that should cause listeners to miss out on a powerful, and often hilarious, classic. A.W. © AudioFile 2012, Portland, Maine [Published: JUNE 2012]