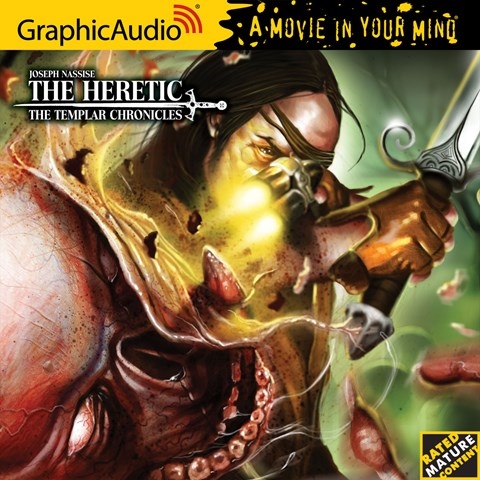 THE TEMPLAR CHRONICLES 1 The Heretic

by Joseph Nassise | Read by a Full Cast

Following the Crusades, the Vatican created a new military branch of their order, the Knights Templar. A full cast narrates “The Heretic,” which moves to the present to reveal the horrific attack that killed Echo Team leader Cade Williams’s wife and left him with the strange ability to step into the beyond. Now Cade and his team are all that stand between the world and the supernatural beings who seek to destroy it. Casting is well done, with Cade’s voice authoritative and gravelly and his late wife’s ethereal and haunting. Even the possessed necromancer is chilling. However, as Cade and his team hunt the group that is killing Templars and creating flesh-hungry Revenants, the sound effects may cause some listeners to become distracted from the story. J.M. © AudioFile 2013, Portland, Maine [Published: JANUARY 2013]