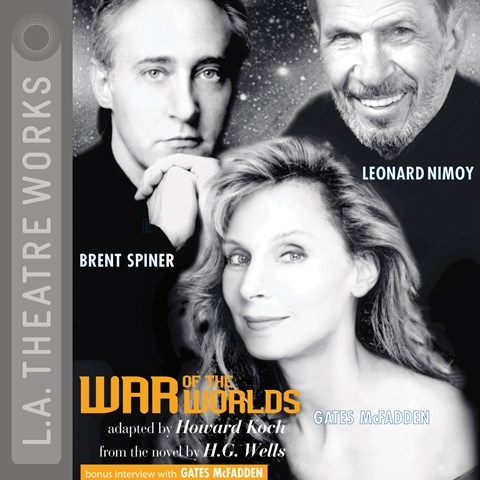 WAR OF THE WORLDS

With brilliantly appropriate casting, LA Theatre Works presents a reinterpretation of Orson Welles’s radio adaptation of War of the Worlds, starring members of “Star Trek” and “Star Trek: The Next Generation.” (It’s even directed by TNG’s John de Lancie.) Fifty-nine years after its original broadcast, War of the Worlds still sends “waves of fear” through listeners as they hear reports of the destruction of modern life by aliens from Mars. Leonard Nimoy’s Professor Pierson is rendered with grace and poignancy as “the last man on earth.” Brent Spiner is excellent in his role as the stranger in the latter half of the piece. With its heart-racing pace and fantastic sound effects, War of the Worlds reminds us how realistic radio drama can be. R.A.P. ©AudioFile, Portland, Maine [Published: JUN 97]