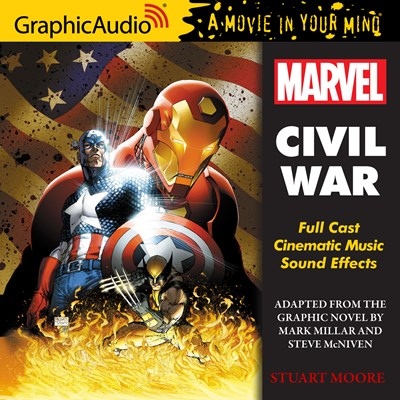 by Stuart Moore | Read by a Full Cast

Forty-nine actors come together in a tour de force to create an amazing audiobook version of Marvel Comics' game-changing series Civil War. Non-comic fans may enjoy it, and comic fans will love it. Everyone sounds perfect—exactly as the characters should, and the music and the sound effects further enhance the experience. While all the actors are outstanding, kudos goes to Richard Cutting, who plays Iron Man with just the right amount of overconfidence and optimism but with dashes of doubt and even a little self-loathing. He heads the government effort to identify, train, and control every superhero after a tragedy kills almost a thousand people. Captain America and others refuse to be conscripted and start a war that splits the superhero community. M.S. Winner of AudioFile Earphones Award, 2014 Audies Finalist © AudioFile 2013, Portland, Maine [Published: APRIL 2013]