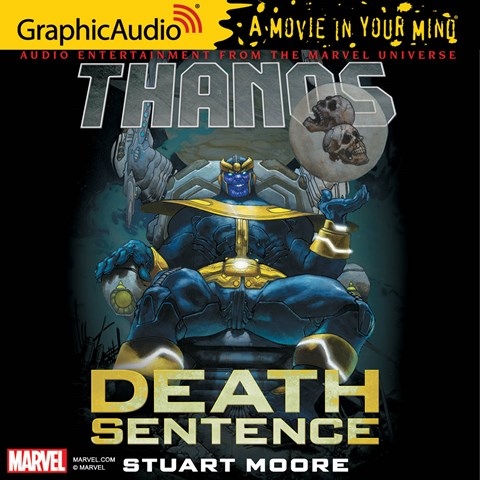 by Stuart Moore | Read by Richard Rohan and a Full Cast

GraphicAudio delivers another exciting and lively full-cast production with a musical score and sound effects. In his ceaseless quest to court Mistress Death, the mad Titan Thanos almost managed to destroy the universe, but failed. Returned to being a powerless nobody, Thanos strives again to conquer the universe but wonders if he’s changed. Richard Rohan performs the lion’s share of the production, delivering energetic prose with a deep, emphatic voice. Christopher Walker voices Thanos, having to balance the older and newer versions of the Titan to reflect the changes in him. Fans will enjoy this rendering of one of Marvel’s deadliest villains while new listeners will get a glimpse of things to come in the Marvel Cinematic Universe. L.E. © AudioFile 2017, Portland, Maine [Published: APRIL 2017]