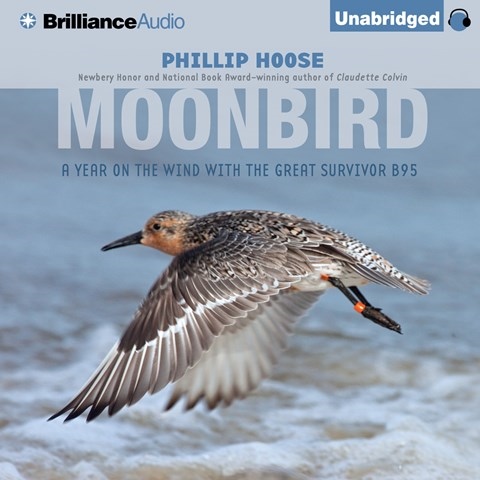 MOONBIRD A Year on the Wind with the Great Survivor B95

This book tells the story of a year in the remarkable life of “B95,” a rufa red knot shorebird that has been circumnavigating the globe for two decades. Describing B95 as the “toughest four ounces of life” on earth, author Phillip Hoose has woven an exciting, fact-filled tale of survival that educates and inspires listeners to consider the interconnectedness of human, animal, and plant life. Full of detailed information about bird migration, climate, geography, and natural science, the interplay of story and background information is well balanced by Hoose's even pacing and clear announcements of section breaks. B95 has many champions, including Hoose himself, whose impassioned narration often reveals a genuine sense of awe at B95's endurance despite significant ongoing changes to its ecosystem. A.S. © AudioFile 2013, Portland, Maine [Published: FEBRUARY 2013]