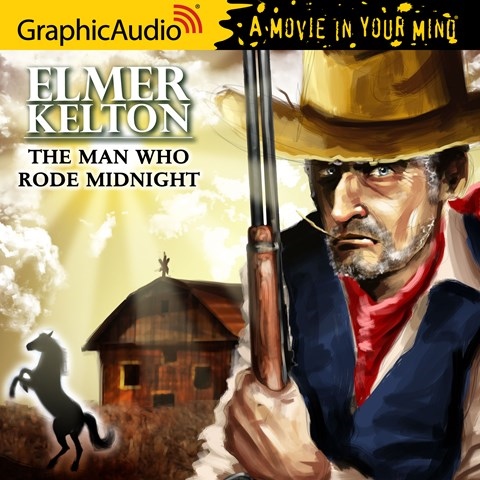 THE MAN WHO RODE MIDNIGHT

by Elmer Kelton | Read by Terence Aselford and a Full Cast

Terence Aselford and cast pour atmosphere and empathy into this warmly human story set in West Texas in the 1980s. Wes Hendricks is a crusty 77-year-old rancher who loves his land and his animals. He refuses to sell out to those who want his property: developers; his grandson, Jim Ed; and a charismatic cowgirl named Glory B., who is Jim Ed’s love interest. The myriad sound effects and mellow accompanying music blend to form a strong production. In the same way, the story harmoniously brings together Wes’s traditional life on the land and Jim Ed and Glory B.’s innovations in ranching. The theme is the generation gap, and (spoiler alert!) a wonderful compromise is realized in the end. Listeners will enjoy the emotional roller-coaster ride. S.C.A. Winner of AudioFile Earphones Award © AudioFile 2013, Portland, Maine [Published: FEBRUARY 2013]