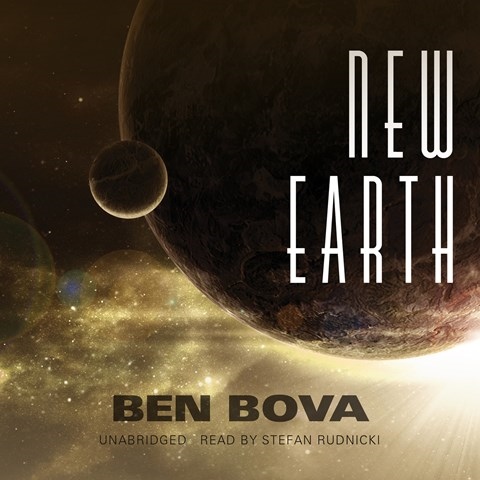 “How can this be?” That’s the question at the heart of this tale of discovery as 12 explorers arrive at earth-like Sirius C after 80 years in cryo-sleep. And who better to voice all their emotions, from wonder to fear, than award winner Stefan Rudnicki? Rudnicki uses his husky baritone to distinctively bring to life a virtual United Nations of explorers and politicians while describing the action through the eyes of diplomat Jordan Kell. Rudnicki’s deliberate narration heightens the suspense as the explorers are buffeted by unexplainable findings. NEW EARTH is Rudnicki’s ninth narration of books in Bova’s Grand Tour series, and it proves to be a masterful blend of story and storyteller. D.E.M. © AudioFile 2013, Portland, Maine [Published: AUGUST 2013]