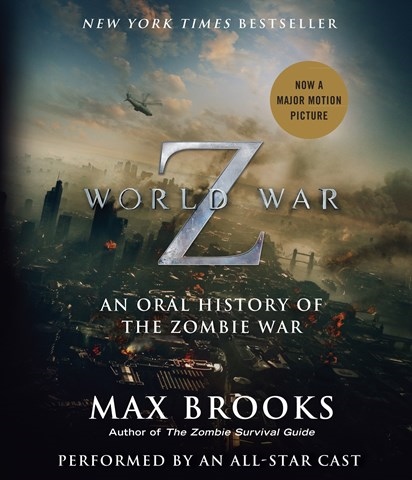 WORLD WAR Z: THE COMPLETE EDITION An Oral History of the Zombie War

by Max Brooks | Read by Martin Scorsese, Alfred Molina, and a Full Cast

What happens after the end of the world as we know it? Humanity rebuilds, and Kirby Impoinvil (Max Brooks) is there to help survivors make sense of what happened the day the zombies came. Helping author Brooks is a host of family friends, including Alan Alda, Nathan Fillion, Paul Sorvino, Rob Reiner, Carl Reiner, Simon Pegg, John Turturro, and many others. This audio production was released to coincide with the movie of the same name. That it’s a real drama is not surprising given the stellar cast. They don't just read the book, they act it out. And don’t think this is a teen thriller. The zombies serve as a backdrop to the larger story of how humankind reacts to such an unexpected and catastrophic invasion and the inevitable conclusion that millions must be sacrificed to save the rest. M.S. Winner of AudioFile Earphones Award, 2014 Audies Finalist © AudioFile 2013, Portland, Maine [Published: JULY 2013]