Home»Reviews»ARISTOTLE AND DANTE DISCOVER THE SECRETS OF THE UNIVERSE 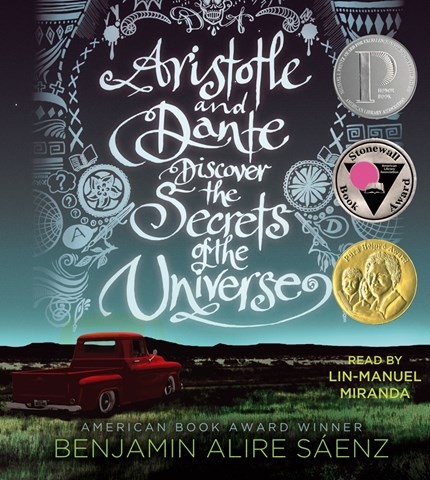 ARISTOTLE AND DANTE DISCOVER THE SECRETS OF THE UNIVERSE

Lin-Manuel Miranda’s neutral tones highlight the simplicity of this powerful, sparely written book. He accurately represents the defensive posture of 15-year-old Ari, who feels distanced from his own life. Miranda’s clipped expression reflects the teen’s frustrating attempts to comprehend secrets and other important aspects of his world: why his father hides his memories of Vietnam and why no one speaks of his imprisoned older brother, along with how he can come to terms with his confused feelings for Dante, another Latino boy, and, toughest of all, how he can make sense of who he really is. The dispassionate tone of both author and narrator belie the conflicting emotions Ari feels as he tries to grow up in a “universe of almost-men.” S.W. Winner of AudioFile Earphones Award © AudioFile 2013, Portland, Maine [Published: JUNE 2013]