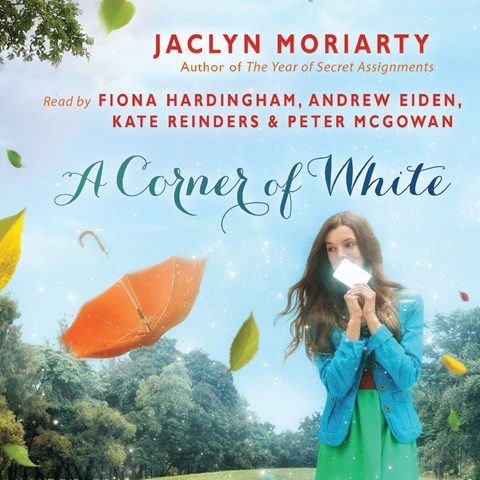 A CORNER OF WHITE The Colors of Madeleine, Book 1

Fourteen-year-old Madeleine and 15-year-old Elliot live in two different worlds—from which they communicate to each other by letter. Madeleine is being homeschooled in Cambridge, England. Elliott is a farm boy from the Kingdom of Cello whose father was killed by a purple storm (or he ran off with the physics teacher). The two find a crack between these two worlds in a parking meter. Fiona Hardingham makes Madeleine’s pluck, obsession with Isaac Newton, and amused disbelief in the existence of Cello both believable and lovable. Andrew Eiden’s Elliott is a smooth heartbreaker but one full of good cheer, common sense, and bravery. Also in the mix is a giggly newspaper column by a royal princess, voiced by Kate Reinders, with corrections and footnotes delivered with appropriate authority by Peter McGowan. It all adds up to a terrific fantasy voiced by equally terrific narrators. A.B. Winner of AudioFile Earphones Award, SYNC 2015 © AudioFile 2013, Portland, Maine [Published: JULY 2013]